The main interface to the MRSware Service is the MRSware Desktop Client.  This form of technology is generally referred to as "Smart Client" technology.  What it does is combine the benefits of being an online service with the productivity of a desktop interface.  This diagram gives an overview of where Smart Client technology fits into the browser vs. desktop application paradigms: 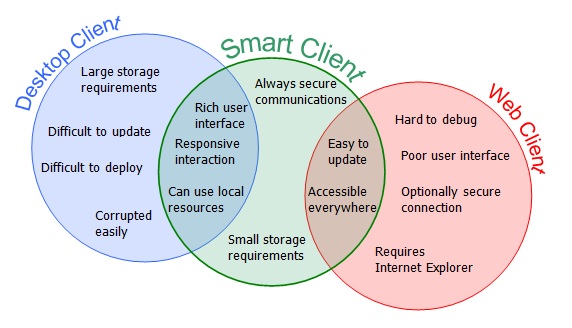 It's quite true that web browser interfaces have come quite a ways since we started with the MRSware Smart Client architecture in 2002.  Since that time web browsers themselves, as well as the client technologies used to design the interfaces within them have made large steps forward in the spaces of usability.  With that being the case, perhaps the above image from the original specification for the technology is a little harsh for the Web Client aspect.  However, still the power of the architecture proves itself in several main areas for us, including:


Speaking of a more familiar environment...  The MRSware Desktop Client was designed to look and work like a regular (and very familiar to Outlook users especially) Windows application.  This allows for Users to jump right in and be productive.  Training -- which we provide as part of every MRSware package -- goes a lot further when the User already knows what to expect and how to generally navigate and work with a program.

Another thing that can be precisely controlled using a Smart Client architecture is the communications channel between the client and the server.  We use a custom TCP communication layer that has several benefit, including: